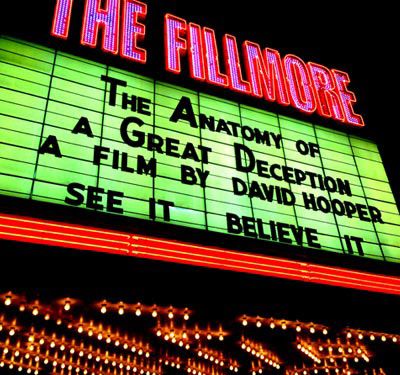 In May 2013, two years after stumbling onto a simple question about  9/11, David Hooper decided to make a short video for his friends and  family to help convince them something was very wrong with the official  story of the 9/11 attacks.

That small video project turned into a major  motion picture called, The Anatomy of a Great Deception, which was  released in September 2014. The film, which opened in 45 cities around  the world, has been viewed over 30 million times as of early 2018.

"It is  considered one of the best 9/11 films in existence, noted for Hooper's personal story of coping with many staggering discoveries, tightly woven  into a stunning breakdown of the attacks on the World Trade Center," said Kelly David, COO of AE911.

If customers can’t find it, it doesn’t exist. Clearly list and describe the services you offer. Also, be sure to showcase a premium service.

Having a big sale, on-site celebrity, or other event? Be sure to announce it so everybody knows and gets excited about it.

Are your customers raving about you on social media? Share their great stories to help turn potential customers into loyal ones.

Have you opened a new location, redesigned your shop, or added a new product or service? Don't keep it to yourself, let folks know.

AGD2 is in post-production again, after suffering several uncanny setbacks.  The release date is TBD.

This links to our (main) Electronic Press Kit (EPK), which has an over-abundance of infomation.

We may send a few emails near premiere dates, and an offer or two. So, if you like discounts, inside info, VIP seats, premiere tickets, etc., add your email below, which we'll never, ever, ever, share with anyone. Like you, we don't like to be bombarded with emails, either. With that said, several cool, unique, (even) free gifts and special access to the film, will only be available to die-hard fans, who dare enter below. [cue loud laughter echoing in castle].